Travel tags and looking back...

'the only time you should ever look back, is to see how far you've come...'

Well, the first good news is that both of my most recent robin pictures have flown off to new homes, which is just amazing - it's still a great feeling to sell work, and to think someone likes what you have done enough to want it on their own walls.

I've needle felted a few robins over the years and sometimes it's good to look back to see how my technique and ability has improved.

There are times I feel a bit defeated and deflated with it all, but having looked at older work I can see that I HAVE made progression and I HAVE got better...I hope you agree!!


I think looking at my earlier robins, I have since improved on my blending of colours and the addition of details and shading.  My latest two robins are below: 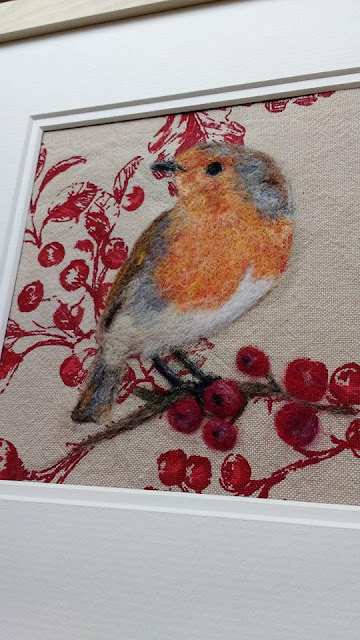 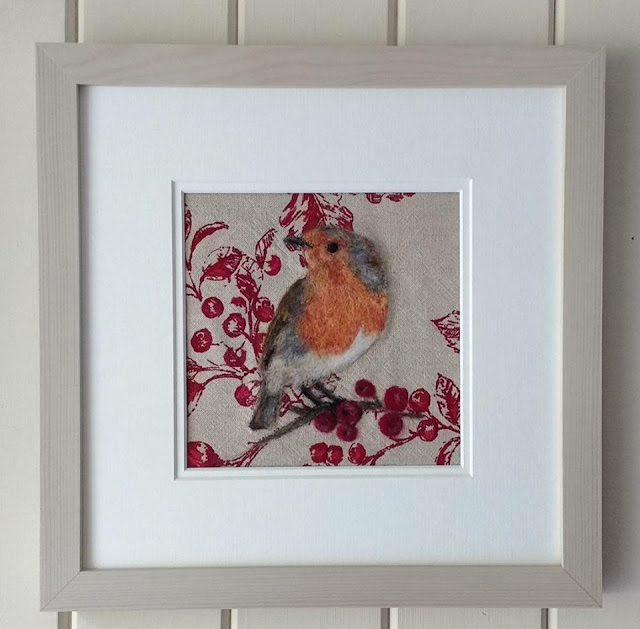 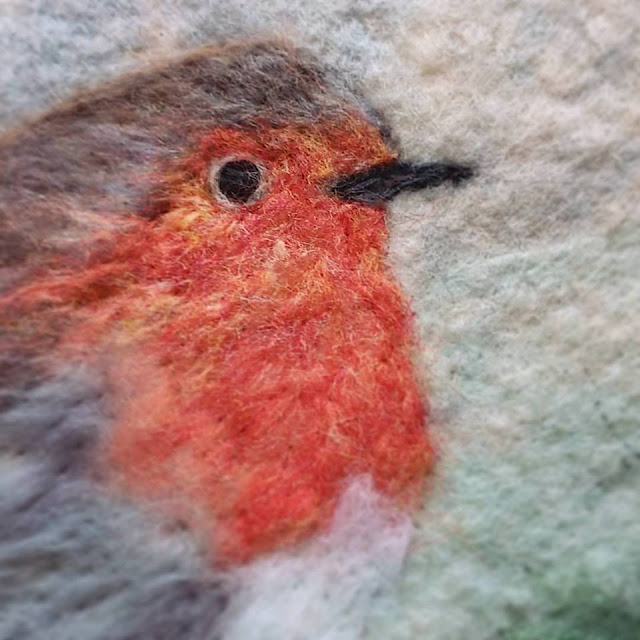 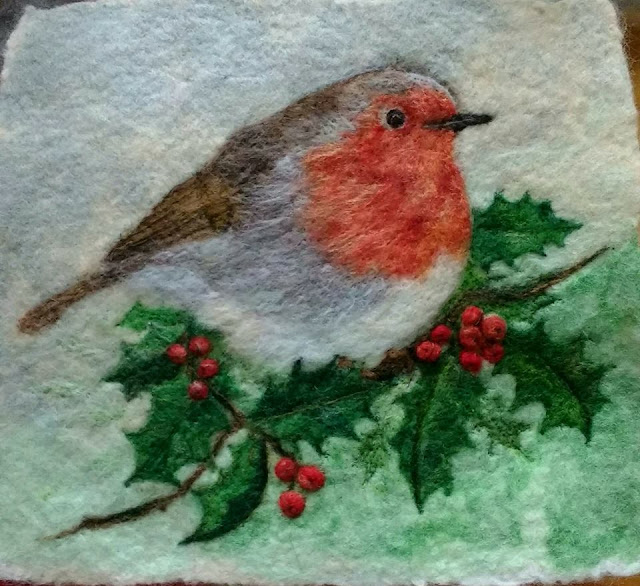 I think I've got a much more realistic feel to my birds now, which is definitely a step in the right direction! Though I do struggle with feet...often resorting to a well positioned leaf!   Keep practising!!

I hope these latest pictures give joy to their new owners...farewell my robins!!

I do like doing the needle felted birds, but I also enjoy trying new things because I'm still not convinced I've really found my 'thing', do you know what I mean?!  Will I know when I've found it?  I really hope so!!

Following the Anne Kelly workshop that I wrote about in my last blog, I joined in with her 'Moving Memories Project' where anyone is able to contribute a travel tag which will be included in one of her exhibits.  The following is taken from her blog which you can find HERE 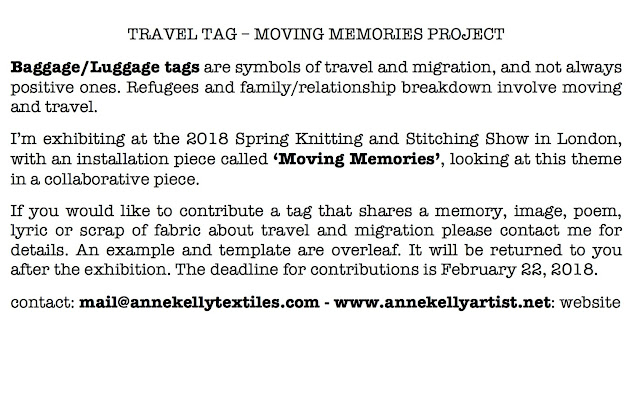 This is actually quite a thought provoking project, and can be taken down any number of avenues, including one's own personal experiences, but I decided to make one along the refugee theme.

I started by cutting out my tag base out of thick watercolour paper, and then layering on tea bag paper and hand dyed chiffons - the rest then just sort of evolved.

I played around with a few different ideas and eventually decided that whilst I wanted to include people in my tag, I didn't want to make them too stereotypical of race or religion.  The blank faces, in retrospect, are probably quite apt as refugees are often thought of as a 'whole'  rather than individuals with names - other human beings with  a life story that perhaps we would rather not hear. 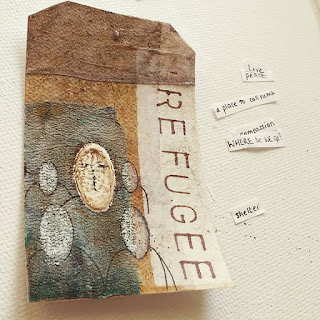 I created the main face with gesso,  pressed through an oval stencil and added oil pastels, metallic paint, stitch,  words and a little more chiffon to complete the tag.  I backed it with some rust stained cotton. 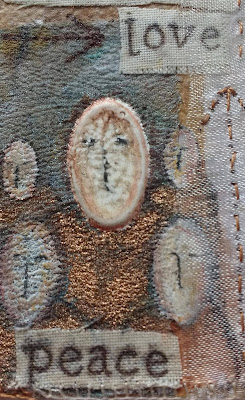 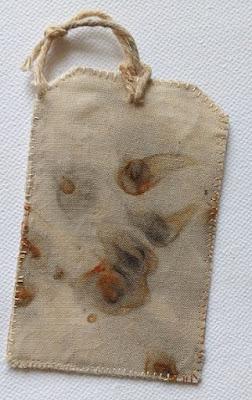 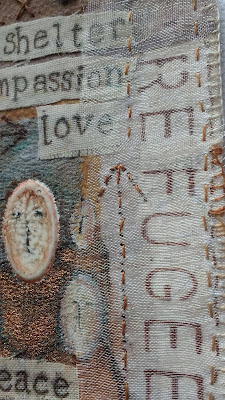 I think the tag has ended up being quite moving  - and after all, shelter, compassion, love and peace are basic needs for us all aren't they?  It is hard to imagine feeling the need to make a long and dangerous journey to another country in the hope of finding these things...what a broken world we live in. 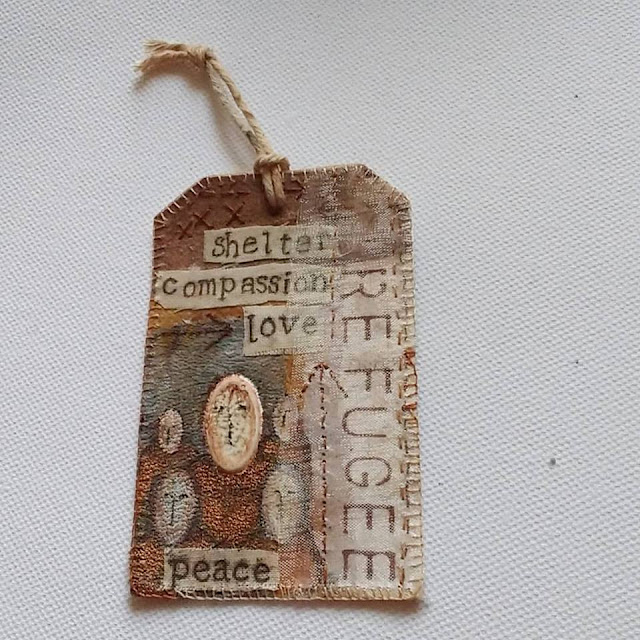 On a lighter note, I decided to make another tag, this time featuring the most amazing little bird - the swallow.

Living on a farm, we have many a swallow come to stay every summer, returning to their nests after travelling on the wing for over 9000 km from South Africa - a pretty epic journey don't you think?!  I love to watch them swooping and diving over the fields, feeding on the flies and insects; they are true aerial acrobats.

When they leave here at the end of the summer, when the days start to become shorter and the change of season is in the air, they set off on their migratory journey across the channel to France, down through Spain, across the sea to North Africa and over the Sahara to South Africa - just incredible. 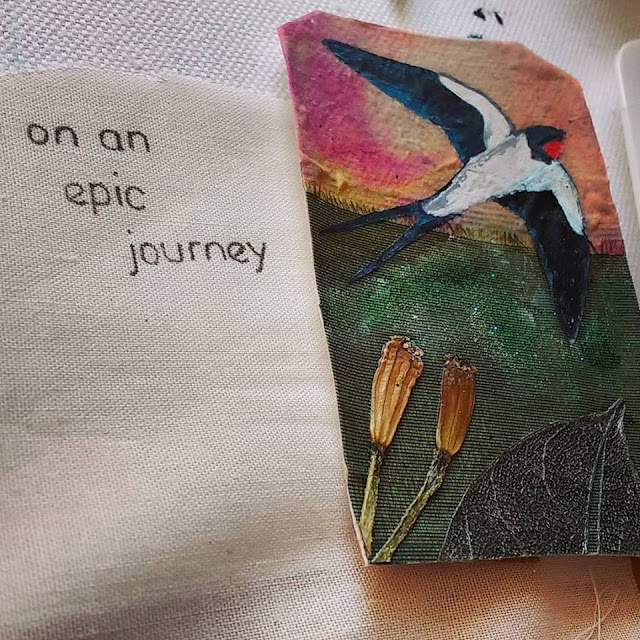 I did intend to include words on my tag, but working on such a small scale it was a bit tricky, and actually I like it just the way it is.

I attached coloured silk to my tag for the sky and coarse organza for the 'grass' - the addition of dried seed heads, stitch and a skeleton leaf added some surface texture.  I glued a  paper swallow I had drawn and cut out onto the tag and then hand painted it (which was a bit fiddly!).  A final flourish of glittery  powder gave it a nice bit of sparkle. 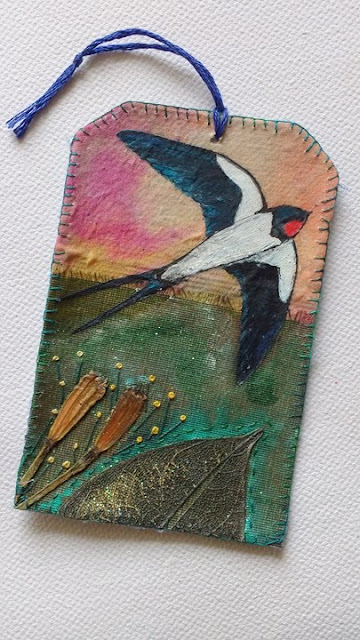 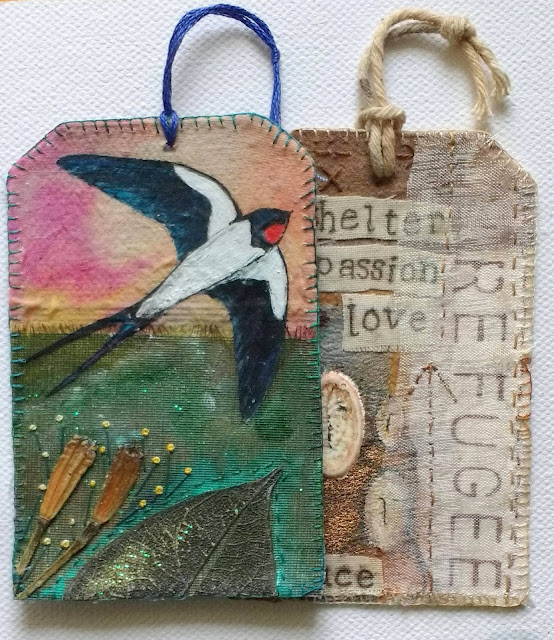 So these will be sent off to Anne very soon to join all the other tags - some from all around the world.  It should make for a very interesting exhibit.

Working on the travel tag has spawned an idea for a larger piece about swallows and their journey, and will fit in nicely with the new theme we are working to in the St Ives Textiles group - 'Fur, Feathers and Fish'.  I'm sure some handmade felt will feature, and maybe some needle felting, but I'd really like to try and mix it up a bit more.  I enjoy playing around with mixed media and printing, so I'd like to try and include some other techniques - maybe in the form of an art quilt or wall hanging...maybe!! The ideas are there floating in my head, but I can't quite get hold of them properly yet - anyone else have that problem?

I wonder if during this process, I might find my 'thing'...or maybe what's more important is to just enjoy what you're doing, regardless of method and style.