Well, firstly, I'm really delighted to have been asked to join 'St Ives Textiles' which is a small group of ladies who have a diverse range of skills from mixed media to embroidery and weaving to patchwork.

I have been made to feel most welcome when I attended my first meeting, which helped so much because I was a bit nervous to say the least!  I had to take some of my work for them to have a look at, and received some lovely compliments and I came away feeling a little more confident as well as inspired.

I think I'm probably guilty of hiding behind the computer and I really like Instagram for getting feedback on things I've made - but it actually can't beat someone seeing things 'in the flesh' and giving you positive vibes!

There's been a lot going on over the last year or two, and I've shied away from the commitment of showing and selling work publicly for one reason or another.  However, I'm so glad I said 'yes' to 'St Ives Textiles' and I'm sure that spending time with like-minded people will broaden my knowledge, skills and enthusiasm as well as chip away at any self-doubt and lack of confidence!

As part of the group, we are working along the theme of 'Kernow Inspirations' (ie inspired by Cornwall) with the end result being a week long exhibition during the St Ives September Festival.

If you would like to follow the group, there is a blog here as well as a Facebook page here .  The blog has a list of the artists involved down the side so you can see some of their amazing work. 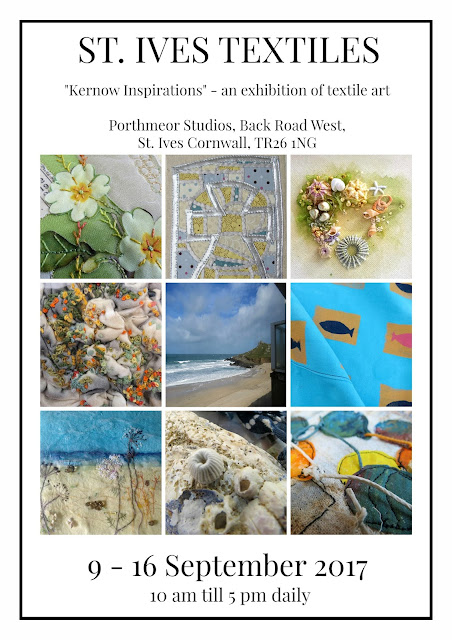 Most of my work is inspired by living in Cornwall and I have a lot of photographs taken whilst out walking to use as a basis for ideas.  As our work will be for sale, my challenge really is to come up with some smaller items, like brooches and cards to compliment some of the framed pictures I will have.  I would also like to make some felted vessels and scarves as well as some more book covers.  I have quite a few ideas, I just need to book out some 'me time' to get them completed!

We are encouraged to keep a sketchbook - something I've always fallen short on before - so I'm trying really hard to record ideas and inspiration in a book for visitors to the exhibition to have a look at.  My drawing skills are not brilliant, but it will be nice to look back on and I like incorporating a bit of poetry or wordery into the pages wherever possible.

I have already used some of the photos in my last blog to inspire more work - the amazing gorse along the coast prompted a look at the flower, simplifying the shape and making a few brooches to reflect that green and gold against the blue skies.

I also blew the dust off my embellishing machine and had a play making what I planned to be a card topper, but spent so long on it I think I will frame it instead!  Out of choice, I prefer to needlefelt by hand - I like the control I have in placement of fibres etc, and it's QUIET!  The embellisher has been described by my husband as sounding like a road drill coming through the ceiling ( my little craft room is upstairs), but despite the racket and vibrations there is definitely a place for it in quickly creating backgrounds for further embellishment, although in the example below it wasn't quick, probably because I hadn't used the machine for a very long time, took it steady and was afraid of breaking needles!!

I also pulled out my sewing machine (again a gatherer dust - why am I so afraid of using machines!?) and  did a bit of 'stitch and slash'. I had a square of fabric created on the embellisher using fibres, silks and yarns in the moorland colours; I then laid a piece of green slubby material over the top and stitched straight lines going across it to join the two layers.  I then cut in between the stitched lines to reveal the bottom layer in strips, fraying the edges to create texture.  I like the effect - this could be used to make some funky brooches or maybe for cards.

I've chosen a walk between Rinsey Head and Porthleven as inspiration next (interested in the walk? find it here).  There was plenty to see - mine houses, rock formations, sea pinks - and we saw 3 choughs, which are Cornwall's 'special bird'.  You can find out more about them here .

I'd love to create some pieces with the chough as a theme, so I think that's what I'm going to have a look at next.  I've an idea to have a go at making a 3D needlefelted chough, which could be beyond my 'skillage' but if I get time I think I may have a try!  If you never see it on here, you know it was a complete failure!!

Well, that's my news so far - thanks for taking the time to read this and hopefully the next blog will have a chough or two flying through it.

Please feel free to leave a comment, say 'hello' or let me know what you're up to creatively - always lovely to have feedback!