Well, with October coming to a close it’s a couple of months since my last blog post, and I ended that with an intention to work on a picture focusing on the hydrangeas from my garden.
I had been experimenting with some different techniques and wanted to incorporate some paper into the felting process.
With one attempt thrown into my recycling basket, I started again and this was the result.  The paper inclusions did work and they have added some (very!) subtle effects in the petals, so kind of a success,  but still more practice required on the paper felting to really get a handle on it! 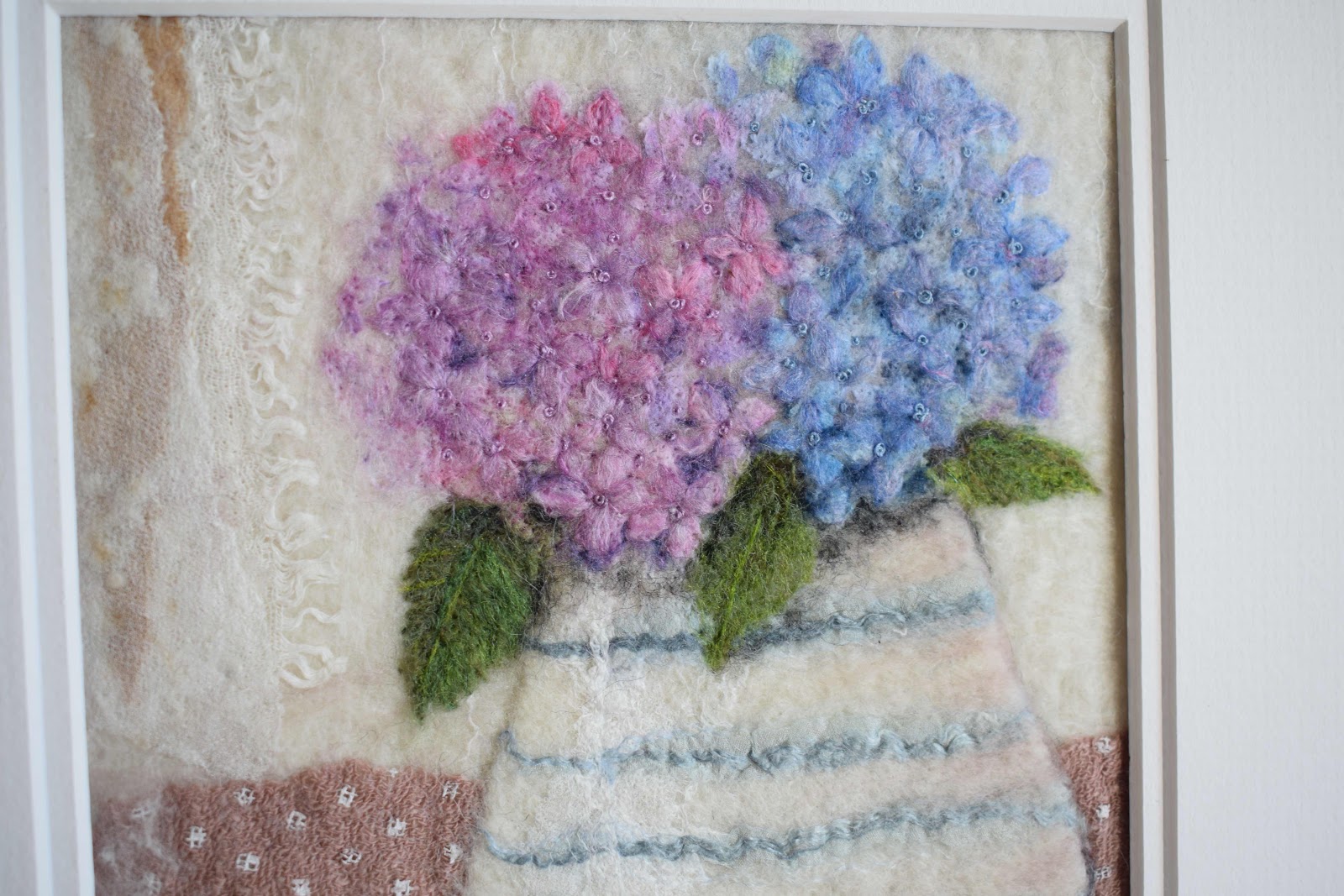 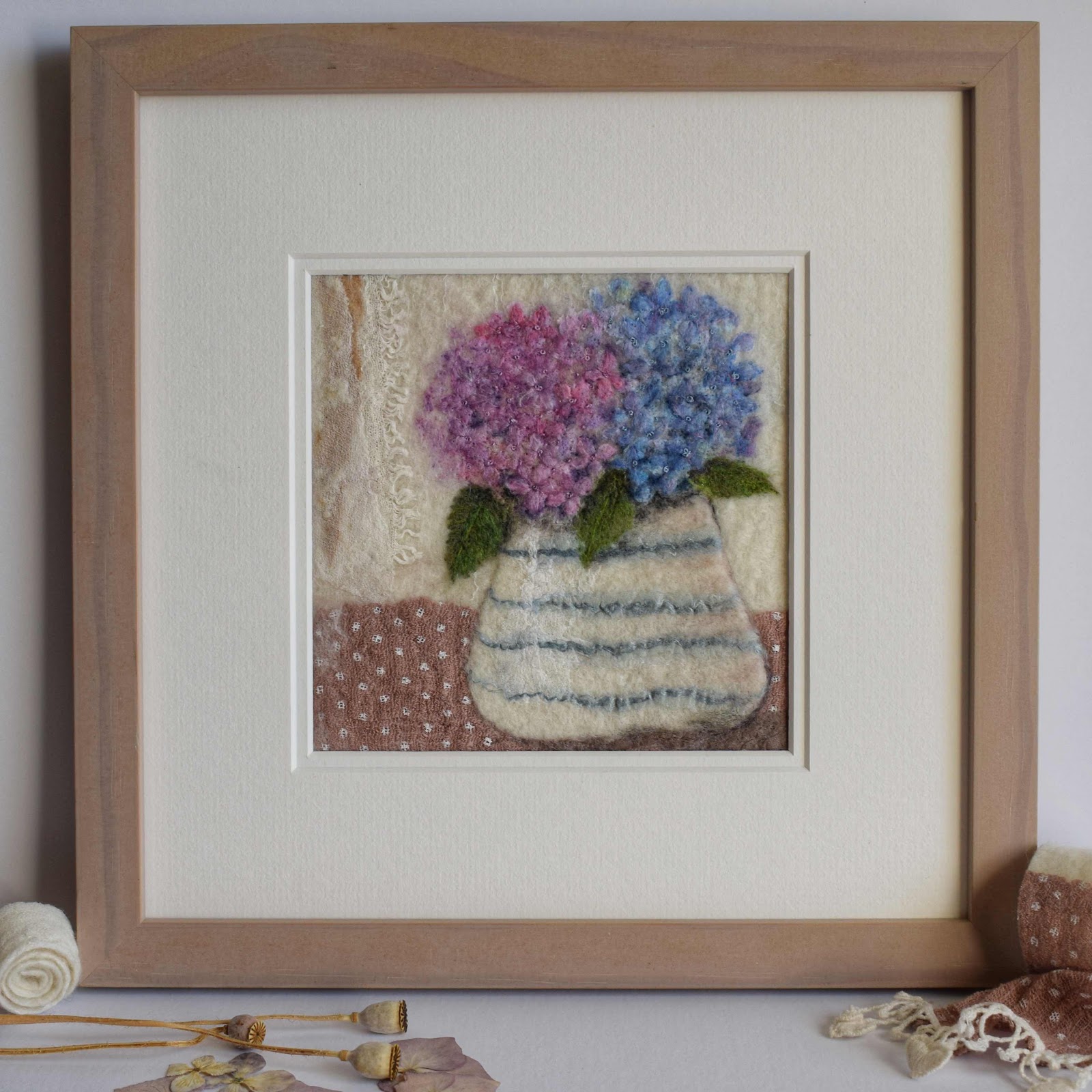 I had the perfect frame for ‘Hydrangeas and Stripes’ and I’m very pleased to say that it sold fairly quickly which is amazing.

‘A Bowl Full of Cheer’ is one I did a while ago...it’s one I’ve had hanging on my workroom wall as a reminder to myself to show a little more restraint. I inwardly groan looking at it sometimes because it’s obvious that I just threw too much at it in the excitement of creating surface textures without thinking about the overall composition, which is a bit messy. No wonder it didn’t sell 😀. 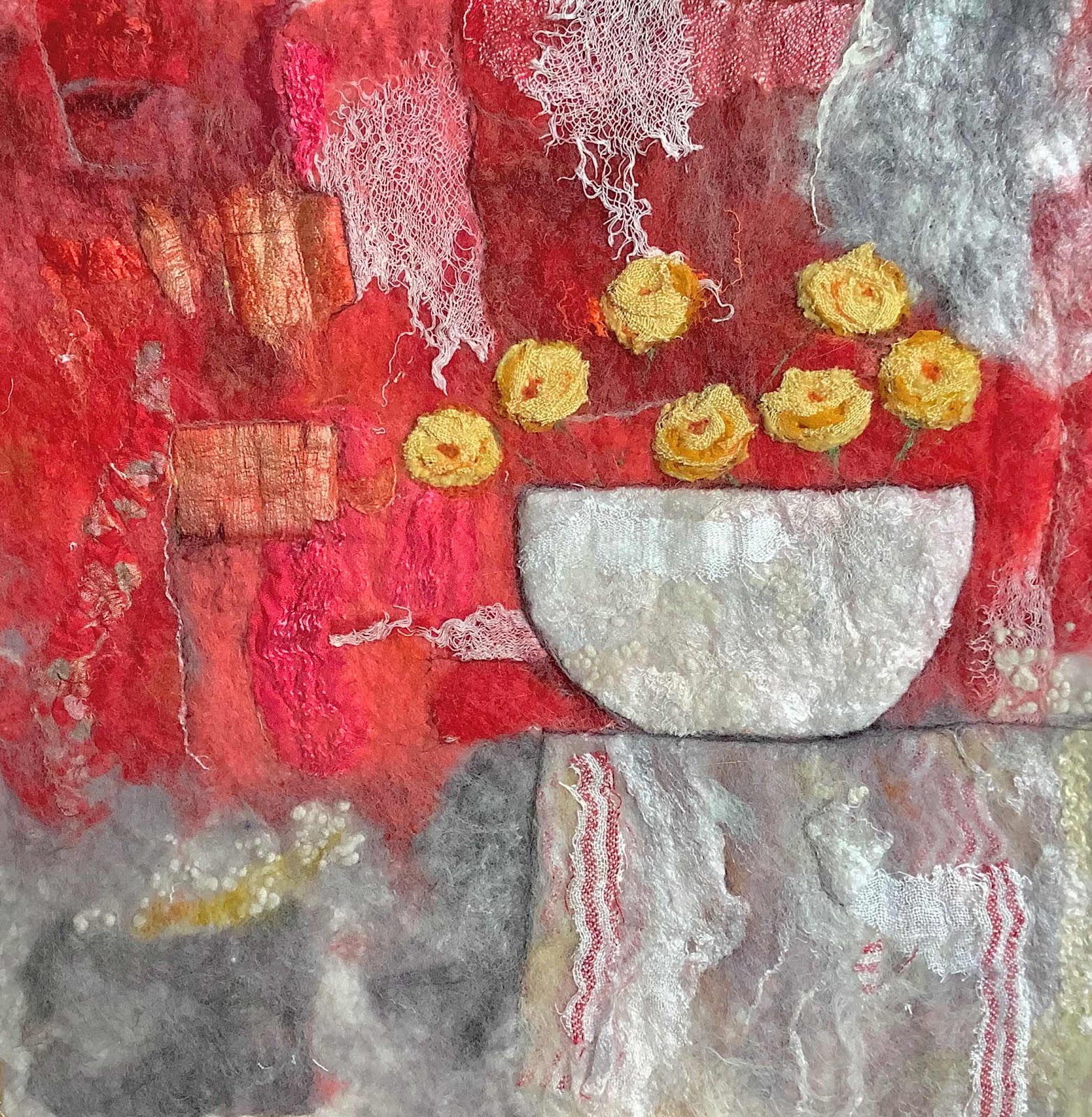 However, I’ve always kind of liked it, or at least the idea of it!  There was scope to felt it a little more which meant I could make some subtle changes to the flowers and the background colour by needlefelting wool fibres through from the back and then wet felting.
After a little more shrinkage and tightening up of the fibres through the felting process, I gave it the chop...getting rid of the distractions on the right hand side and cropping in on the bowl. 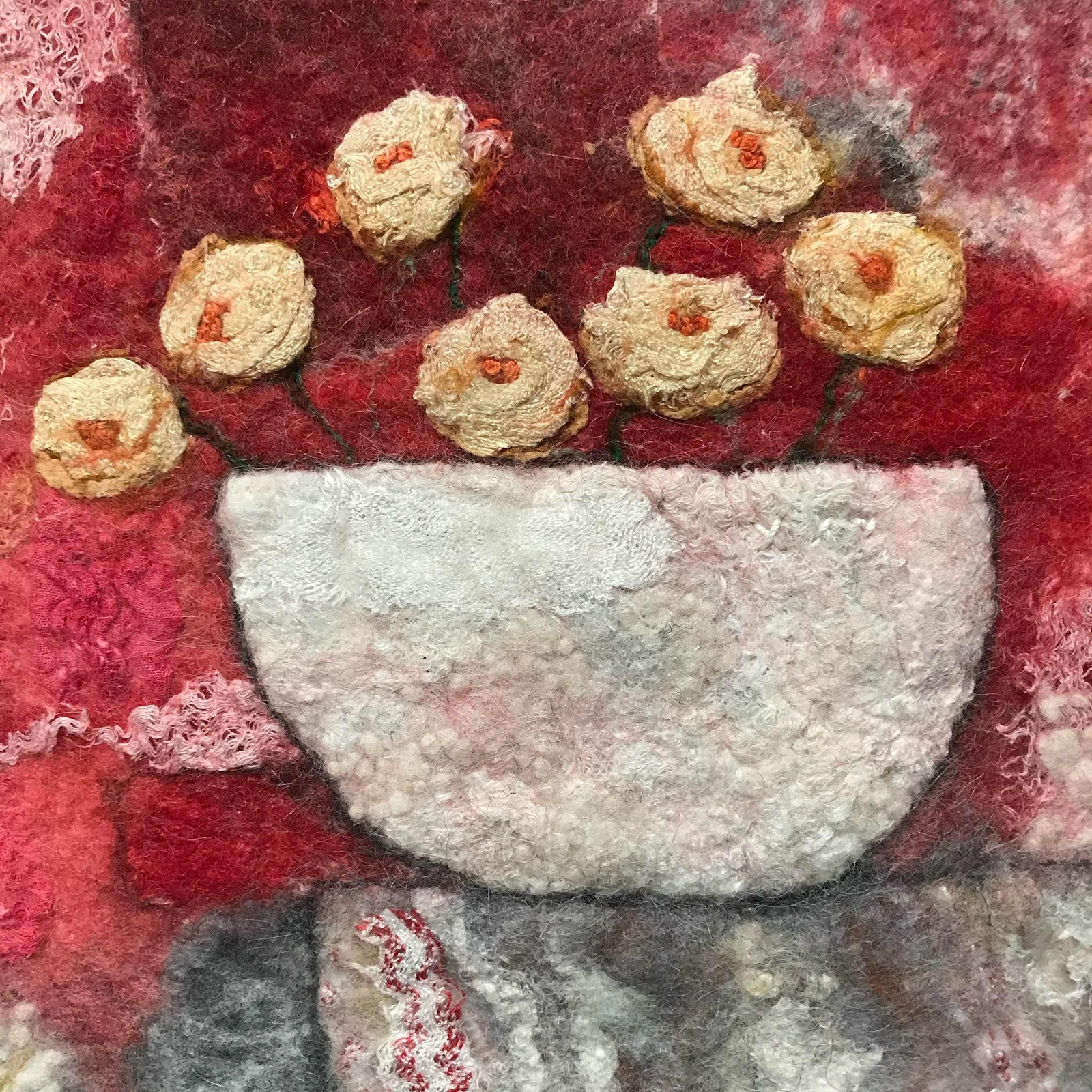 I think it looks much better now in its cropped format, the refocusing  and reduced ‘background noise’ have simplified the image.  Less is definitely more in this case! I hope you agree...

So here’s another one that I did way back in 2016 I think...it sits in its little frame here as another reminder about composition. This one was inspired by a photo I took locally, and I called it ‘November Sun’.  The thing that keeps shouting to me is the fact that the road ended up in the centre of the picture, and I’ve always thought it would have been a much better composition if the road was off to one side...nothing really leads you around the scene. 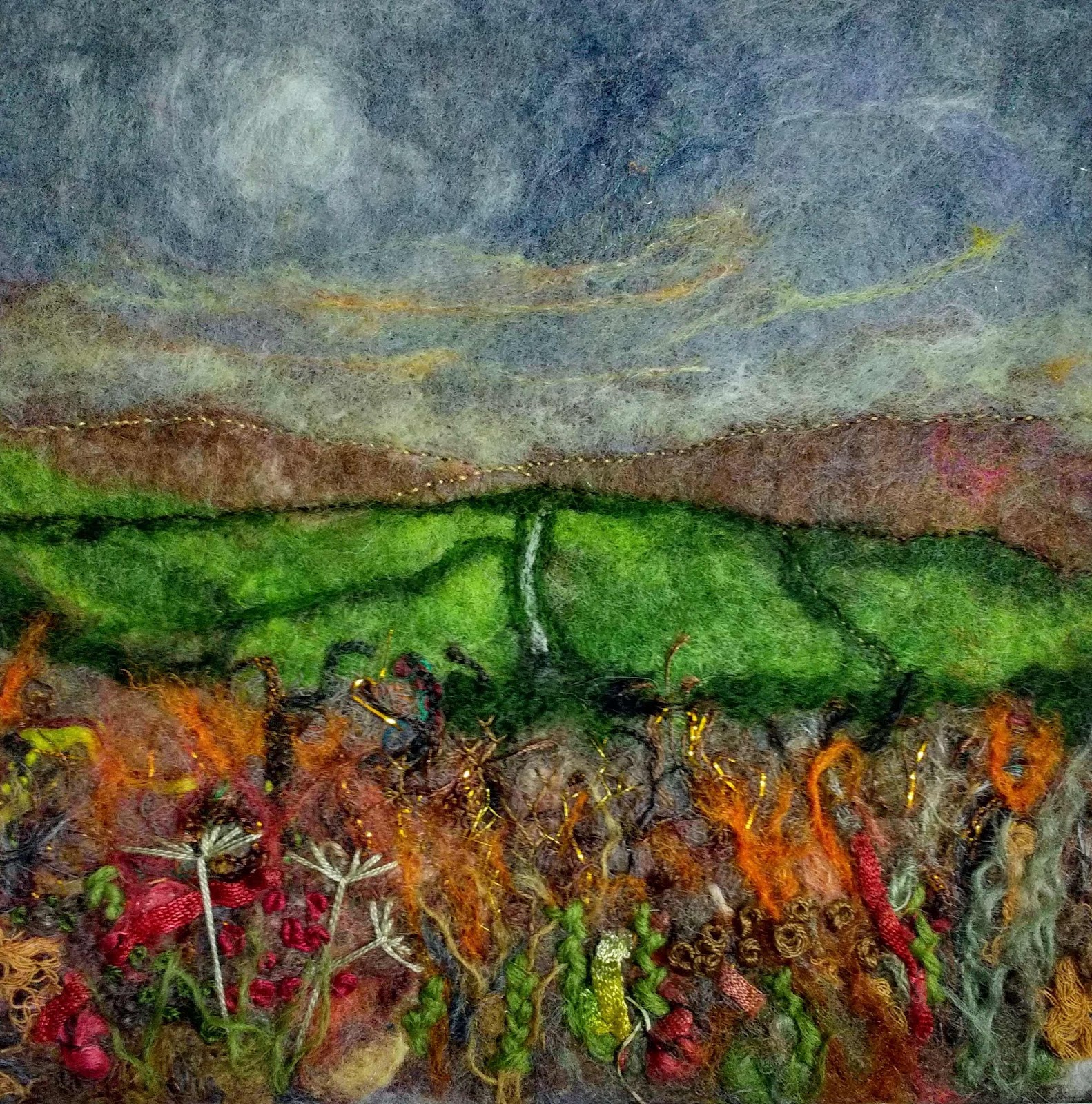 So I found the original photo as my starting point and I’ve created a new, bigger version...with the road most definitely off to one side! 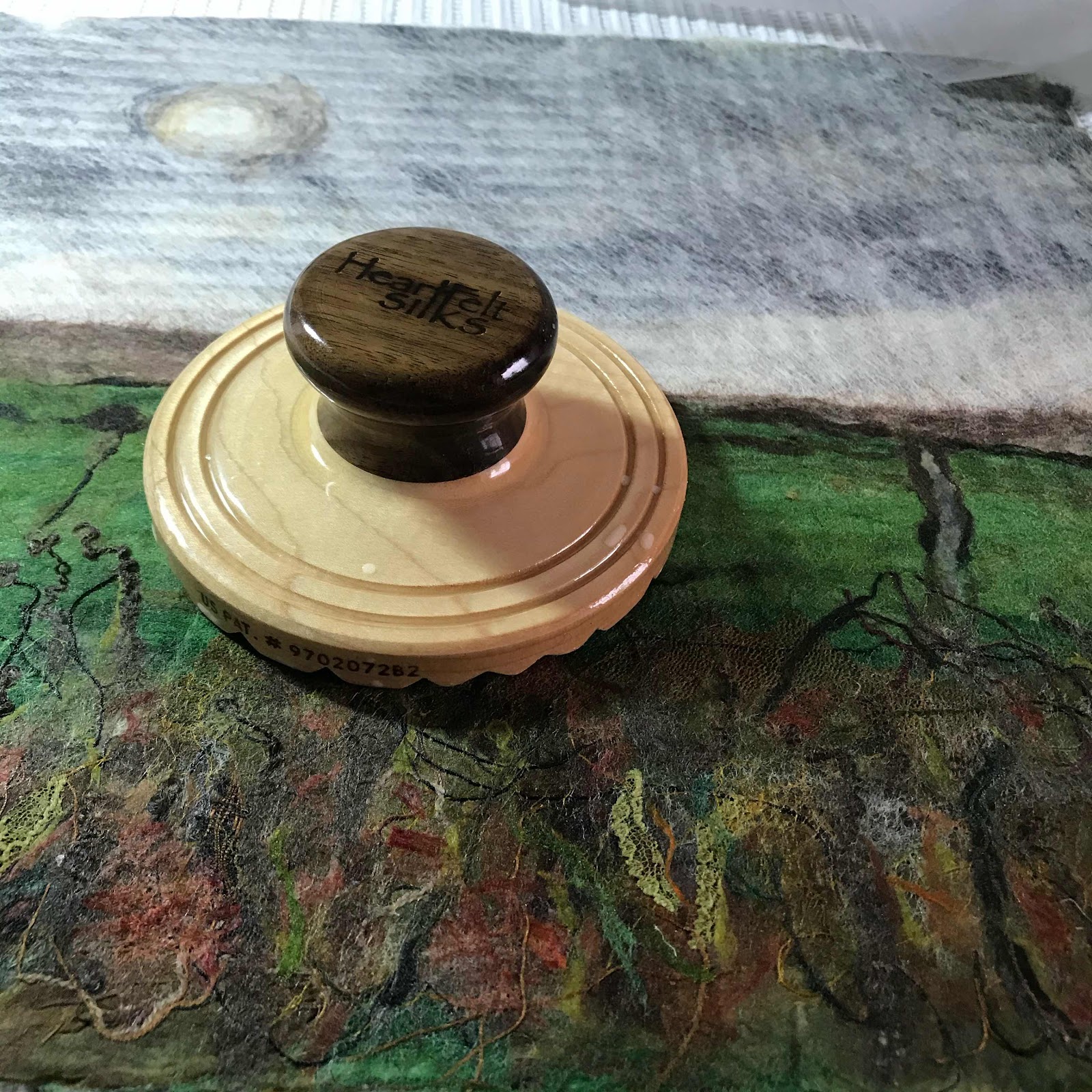 So after wet felting and some needle felting, this is how it’s looking...I think it’s pretty much finished, just a little tidying up in places and the birds need a bit of tweaking but I’m much happier with it. It’s a much bigger format than before, and I’ve resisted using stitching just trying to use the layering within the felting process to create the surface texture. It’s a dull day for taking photos, so it’s been hard to capture it properly. 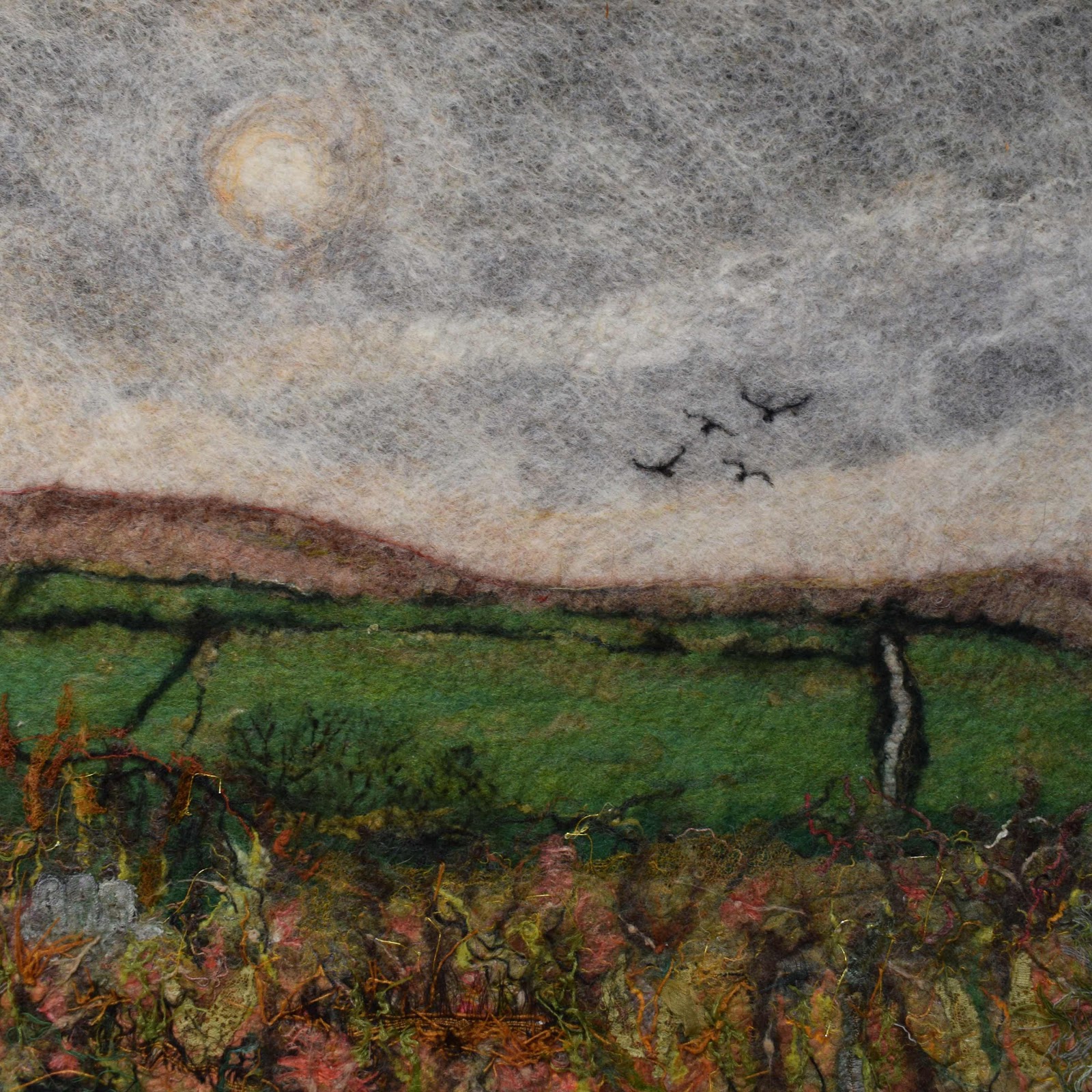 I’ve quite enjoyed revisiting work and trying to improve things second time around. I’m becoming more aware of the importance of composition...and whilst I still won’t get it right every time I feel more able to evaluate where I may have gone wrong.

Well, my personal intention to try a little more abstraction in my work appears to have fallen by the wayside, and I seem to have continued with the usual ways and themes.  Just because I’m drawn to semi-abstract doesn’t mean I’d be any good at actually doing it, but it’s still something I’d like to explore even if it’s just for my own amusement!
Why abstraction? A little more freedom perhaps? Creating a sense of something rather than getting hung up on the details, particularly with landscapes?
I certainly like the idea of it but I know it’s not easy to approach things in a completely different way...abstraction is not easy! I think I’m at that place where, because my ‘drawing skills’ are not amazing, my pictures end up somewhere between realistic and semi-abstract and perhaps a little ‘whimsy’ at times. Not that there’s anything wrong with that, and those type of pictures have been selling, but it’s not always about sales is it?
Is it okay to do both styles? I guess so - once I’ve finished and framed these last few and going to carve out some time to play with the abstraction idea and fight the urge to slip into my comfort zone, although at times my so called ‘comfort zone’ actually feels a little tight and tense in the making process. Maybe that’s what I’m looking for, more of a loose and free way of working for a change...even if it’s just a temporary break from the usual. And I still want to experiment with incorporating paper...I will not be beat!!
This little sample square that I’ve shared before is in my sight line on my work table, and there’s just something about it that makes me want to try more... 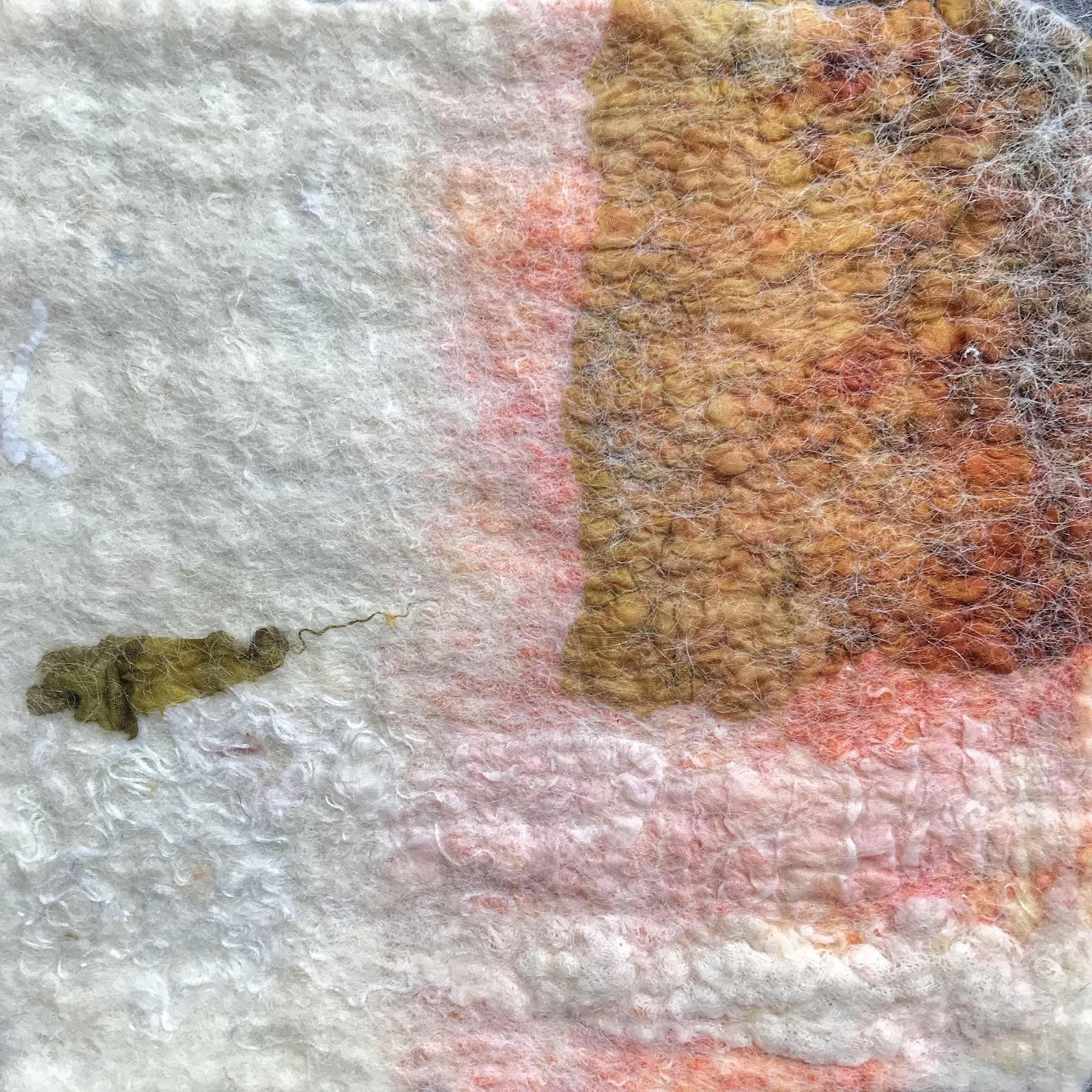 Or maybe it goes this way around... 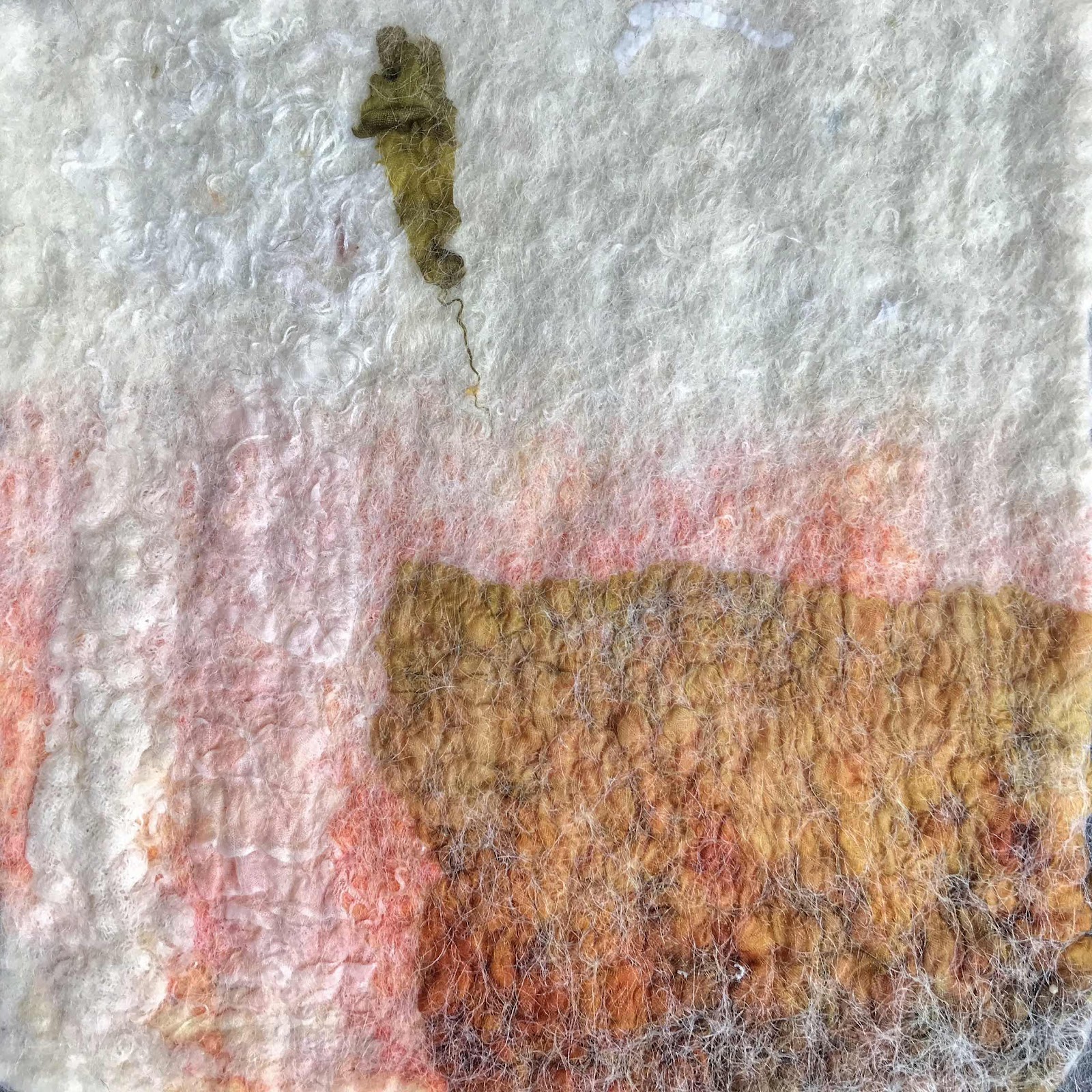 So that’s it for the minute...I fear we may be heading for another national lockdown as I type this...wherever you are in the world I wish you health and happiness until next time.  Stay strong and stay safe...and stay creative.
Tanya xx
at October 26, 2020

Please feel free to leave a comment, say 'hello' or let me know what you're up to creatively - always lovely to have feedback!